Although defendants may believe that their court trial should be confidential to preserve anonymity and privacy, the majority of the time the law disagrees. A key insight in the American political system was that transparency in the courts is more important than privacy concerns. 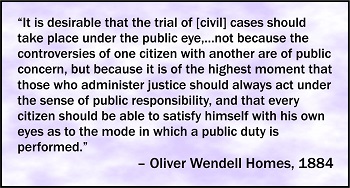 The notion that the public has the right to witness trials in which they are not directly associated may seem like an invasion of privacy to those who are affected by the trial. However, except for a few notable exceptions (Link to Blog 9: “Exemptions to the Public Viewing Rights of Trial Hearings” not yet uploaded), four core principles of American law determine that the rights of the people outweigh the privacy rights of those taking part in the trial.

Do you think that public interest should outweigh privacy rights? Should trials and trial records—both civil and criminal—be accessible by the masses? Does public second-guessing about court cases ultimately serve to weaken respect for our legal institutions?