A lot of details need to be addressed when preparing for a deposition. One of the more important of these is advising the deposition witness on how to prepare himself. A deposition—especially a video deposition—could wind up being the feather in your case’s cap, but if your witness doesn’t know how to behave, how to look, or how to be professional, the benefits of a visual deposition can quickly turn into a handicap. 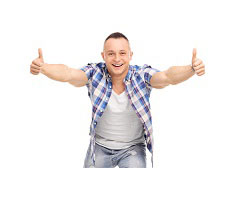 The ancient Greeks wrote the book—some of the earliest books we have, in fact—on excellence in public speaking, whether in government assemblies or the courtroom. One of the three essential qualities of an effective speaker, they believed, was something called ethos: persuasive sincerity, poise, and honesty in the person’s manner.

This factor is still essential today. If a witness is improperly dressed, the judge and jury will not weigh his testimony on its own terms; instead, they will see and hear a person who doesn’t care about the seriousness of the case. This will be seen as disrespect for the legal process and for the court. It can’t help but undermine the value of what the witness says.

Therefore, to ensure that your witness gets the proper attention he deserves while avoiding any misconceptions due to his appearance, it’s essential to let your client know the importance of proper dress for depositions.

Credibility is a hard nut to crack—especially when you’re seeing someone for the first time yet are expected to trust what he’s saying. A good example of this can be seen in politics. Throughout so many presidential campaigns, how often have you seen a candidate in a t-shirt and shorts? Now, besides that fact that you probably don’t want to see some of the candidates in casual wear, the point is they dress professionally to enhance their credibility. They look responsible; therefore (they hope you believe), they must be responsible.

A similar reasoning applies to witnesses in court trials and video depositions.

By convincing your witness to leave the cargo shorts and tank top at home and to put effort into his appearance for his deposition, you can help him better relate to the judge and jury and allow his testimony to get the credibility it deserves.

Rather than a dirty shirt and ripped jeans, business or even business casual attire can go a long way in: