As with any testimony, video deposition witness prep is essential to controlling—as much as possible—how a testimony will play out. The preparation period lets the witness get comfortable with how you will question him; at the same time, you’re also giving him reassurance and allowing him to steel himself for what he has in store from the opposing counsel.

In essence, it is a time for both you and your witness to reach a mutual understanding on how to compose yourselves and deliver honest testimony in the most compelling way for the court and jury. 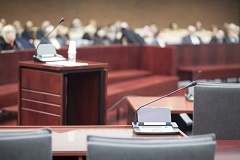 When preparing a witness for a deposition, it is important to make sure that he knows how to come off as responsible, confident, and trustworthy. Providing him with the following advice is a good start to help him achieve this goal before he’s placed in front of the camera. These hints will also help show your professionalism and credibility as they’ll create a sharper and stronger video.

The witness needs to remember to…

You need your video deposition to be as clear and crisp as possible in order to engage the court. Don’t allow the hard work you put in to preparing your witness go to waste. You wouldn’t allow just anyone to prep your witness, so why trust an amateur to record his testimony? Call us today to set up your next video deposition and see how good your work can look.