As a lawyer, you know that a simple gaffe in the courtroom can be the turning point in a trial. Most lawyers secretly hope that their rivals will misspeak and cause that point to turn in their favor. However, if that gaffe goes unnoticed during the trial, you’ll have an additional chance to bring it up during an appeal, if needed…that is, if you can find it in the final trial record. 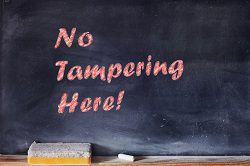 Trial records are basically safety nets for trial cases as they essentially capture everything that happens in the courtroom. Every word that is said, every objection made is recorded and placed in the trial transcript by a court reporter. This means that the entirety of the trial, even statements that were withdrawn or stricken from a testimony, should be included within the trial record.

Unfortunately, human error and miscommunication can cause records to become incomplete or sloppy, resulting in allegations of tampering. Proving those allegations is a challenge, though, when the transcript doesn’t show what is expected. Also, despite many conspiracy plots in legal thrillers and television shows, trial record tampering isn’t as easy as one may think.

Accurate trial records are essential in protecting the validity and verification of trial cases. This is why tampering with court transcripts is considered a serious crime. As such, court reporters must have strong skills and even stronger ethics to ensure the information is 100% intact and accurate.

Once the court reporter transcribes the trial’s dialogue, he then must verify the validity of the transcription with the presiding lawyers before it is certified and sent to the Clerk of Court. As a result, a judge’s falsification or tampering of a record would not only be difficult, but pointless.

In order for a judge, lawyer, or anyone else to tamper with a trial record, he or she would have to be willing and somehow capable of accomplishing the following difficult tasks:

Knowing full well that it’s illegal do you still think tampering with court records would be easy? Or, is it more likely that their was a miscommunication problem during transcription? Before you run off half-cocked with allegations of perjury or fabrication, you may want to check the court reporter’s credentials first.

Although the chance of your trial record being tampered with is extremely low, as a lawyer you know that although something may be improbable, nothing is impossible. In addition to malicious tampering, poor transcription communication, human error, and misunderstanding can also play a huge part in the distortion of trial facts. This is why you need to take a specialized interest in who is transcribing the trial’s reports.

Don’t jeopardize your appeal’s chance by risking the authenticity of a trial record. Secure your case by securing a court reporter who has the skills and ethics to keep your trial records straight and protected. Contact us at (877) 837-0077 or come visit us at our Alexandria office for more info on obtaining the right court reporter for your needs.